THE EXCAVATION OF PENDİK HÖYÜK

Within the scope of the Marmaray project known as Gebze-Halkalı Banliyö Hatlarının İyileştirilmesi (Improvement of the Gebze-Halkalı Suburban Line), excavations that started in December 2012 are being carried out over an area that extends 200 meters to the south of the höyük or mound at Pendik. Pendik Höyük is 1.5 meters east of the Pendik border, 500–600 meters west of Kaynarca train station, and on the coastline to the east of Temenye Headland, which projects about 50 meters into the sea.1 Near the settlement there are two supplies of fresh water, and to the east there is a stream that dries up from time to time. There is no information about the distance between the settlement and the sea during the Neolithic Age. However, given the importance of fish in the diet of the people, it is apparent that access to the Marmara Sea and freshwater supplies rich in marine life played an important role in the decision to settle there.

The mound was discovered together with the Fikirtepe settlement by a worker named Miliopulos in 1908, during the construction of the Baghdad Railway. In these first settlements, which belong to the prehistoric period of the Istanbul region, as a result of the excavations carried out from 1952 onward, three cultural layers were determined. On the top level, a layer that belongs to the Classical Age was discovered; below this were tombs and an architectural layer that had been ruined by erosion; on the bottom level was a Neolithic layer that included a few different phases.2 The final excavations, which started in 2012, were carried out within the 200-meter section of the railroad line located at the archaeological site, on both the north and south slopes, along a boundary that measured 30 meters in length (Image 82).

The excavations that started between the 26+400 and −26+575 kilometer markings of the railway, at a depth of 14.5–15 meters, finished at a depth of 12.62/117 meters, as bedrock was reached. During the excavations carried out in the narrow and conical slope areas, a cultural stratum approximately 3 meters thick was excavated; a stratum that included contemporary materials was found above a stratum belonging to the Neolithic Age. Within the latter stratum, a series of Byzantine terracotta pipes and rammed-earth floors were found. Tombs belonging to the Neolithic and Byzantine periods were also unearthed.

In the 3-42/A-B-C grids of the land line, 26 tombs spaced at various distances from one another were discovered; 15 of these belonged to the Neolithic era and 11 to the Byzantine period. The dead were at first probably buried in major tombs around the settlement area. Smaller burials were later placed inside these tombs by pushing aside some of the bones that were already there. In addition to these tombs, others have been identified, although they were severely damaged during Byzantine construction activities and again during railway construction at the beginning of the 20th century. For example, tomb number 12, located in grid 33/A, in which a skull and part of the skeleton were preserved, was destroyed during railway construction. However, a vessel placed near the adult skeleton as a gift is in quite good condition (Image 83). Within the Neolithic culture layer, Byzantine-era tombs, each of which contained multiple bodies, were also found. 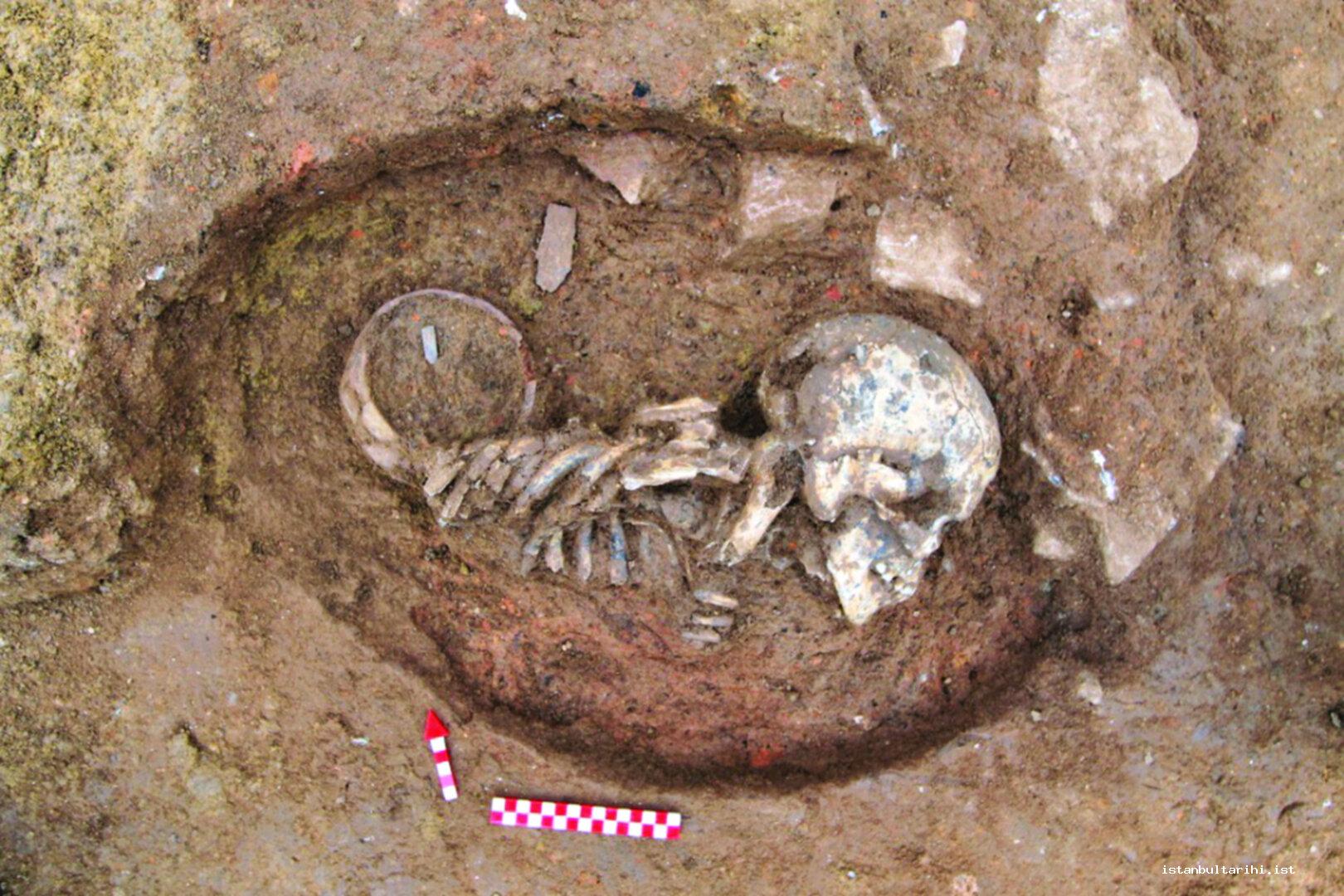 Canals belonging to the Byzantine period were discovered during excavations on the southern slope. A stratum mixed with soil that continued to a depth of 12.45 meters was also identified. At a depth of 12.3 meters, a floor was discovered that was 40 centimeters thick and built of small stones and broken pieces of late-period pipes.

During the excavations that were carried out along the sea line, 26 tombs belonging to the Neolithic Age were found. The corpses, which were not all laid out in the same direction, were all in full or partial hocker position. Bone spoons, left as offerings, were discovered in the tombs (Image 84).

Underneath one of the tombs removed by the researchers, a floor with an area of 2.60 square meters, probably part of a hut, was discovered, as well as architectural remains that belonged to the Neolithic Age. A lateritic floor belonging to an oval hut that measured 2.70 × 2.80 meters was also identified. Next to this floor, there was another smaller hut floor with plaster and rocks on its surface; in a waste pit, a skeleton in a hocker position with seven flint stones in its hands was recovered. 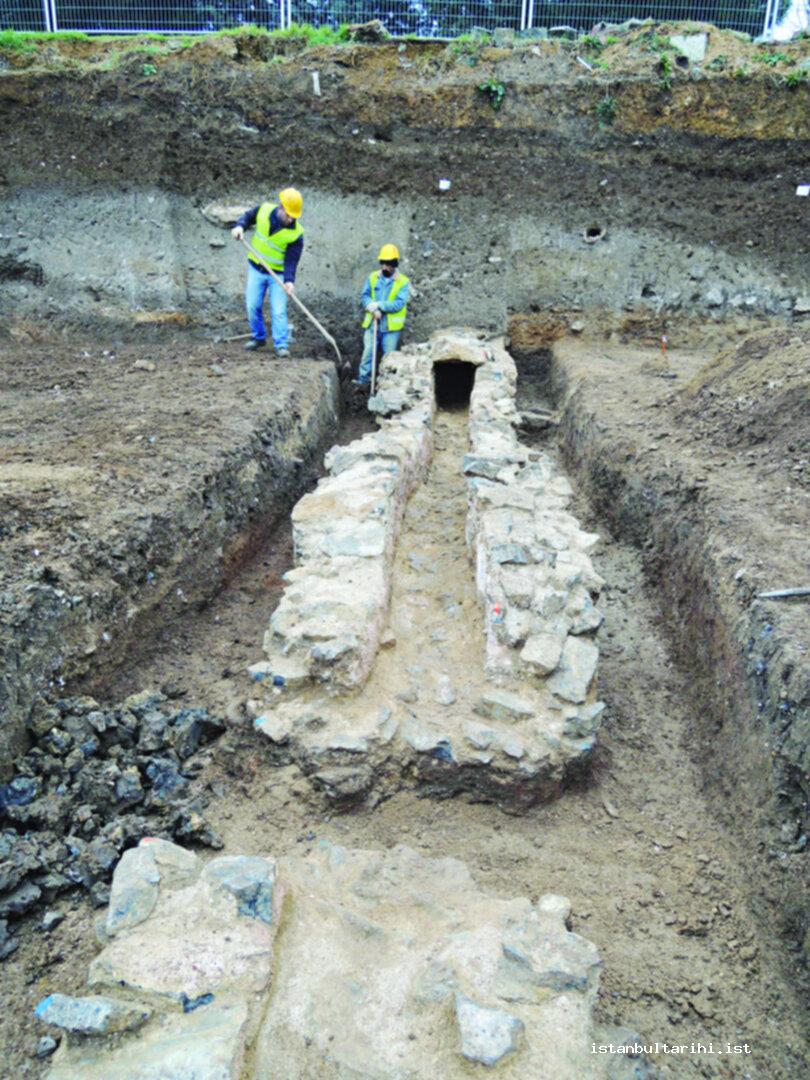 Along the land line, a brick-vaulted canal 20.8 meters in length, 1.05 meters in width, and 0.87 meters in height was discovered. At a depth of 11.55 meters, a wastewater canal measuring 110 centimeters in width was determined. The inside of the canal, the current length of which is 6 meters, was plastered with thick brick-dust mortar. Both sides of the canal were built with stones, and its upper part was covered with stone slabs. These canals, which date to the Byzantine period, were located within the Neolithic culture layer. Around the wastewater canal, mussel shells, beads, and obsidian and flint tools belonging to the Neolithic Age were discovered, as well as pieces of pottery (Image 85).

Studies in the Eastern Area

The excavations in the grids 43-44-45-46/C-D-E-F, which were located on the eastern border of the railway route within the archaeological site, started at a depth of approximately 10.7 meters, and architectural remains were found very close to the surface. These remains, dating to the Byzantine period, belonged to three different phases. The first phase included a stone structure built of brick-dust mortar, which measured 5.60 × 3 meters and was semi-quadrangular in shape. The wall, which was 110 centimeters thick and belonged to the second phase, intersected the structure of the first phase in an east–west direction. This wall was thicker than those of the first-phase structure, but had similar qualities. The third phase was composed of two different pipe systems. The first of the earthenware pipes damaged the entire wall of the second phase. The water reservoir of the pipe system was 20 meters in diameter and was constructed inside the walls of the first phase with an inner surface that contained brick-dust mortar, and was located within the settlement (Image 86). There were Neolithic burials and artifacts around the structure. To the northeast of this area, dated to the Byzantine period, an adobe ruin, which was plastered and was composed of small quadrangle sections, was discovered. It can be understood from the burned pots that this structure, composed of cells, was damaged by a fire. Most of the pots were quite thick and would not have been suitable for daily use. These items, which are thought to have been produced for a special purpose, resemble materials found at the Fikirtepe and Pendik settlements. Apart from these pots, flint blades and flat hand axes were recovered; the remains of a fetus were also found near a four-legged, mushroom-shaped table-like object.

On the northeast side of the mound, an oval hut similar to a typical Fikirtepe hut was found; this hut contained many Neolithic-Age Fikirtepe artifacts.

The excavations, which started at a depth of 15 meters in the Pendik Mound and lasted for nearly four months, came to an end when bedrock was reached at a depth of 10 meters. Under the current stratum, a cultural stratum belonging to the Neolithic Age, 50 to 80 centimeters thick, was identified in a number of places. Within this Neolithic settlement, structures that were related to water and were constructed during the Byzantine period were found; the area was also used as a cemetery. Traces from bases of round and oval wattle-and-daub structures, scattered over the Neolithic settlement, were identified. The architectural remains that belong to this layer were composed of pit-based structures dug into the red soil that is native to the area. It was determined that the floors, which were discovered along with vessels, bone tools, and stone tools, were filled with mussel shells, animal bones, and other similar waste material. The structures also included fireplaces with a great deal of ash, and there were stones around them or nearby.

In the Pendik settlement, 64 tombs were discovered; 11 of these belonged to the Byzantine period. The Neolithic skeletons were in either the full-hocker or semi-hocker position. In some of the tombs from both periods, offerings to the dead were observed.

The artifacts taken from the Pendik settlement reflected the Neolithic character of the area and also illustrated some phases of the Fikirtepe culture. The handmade ceramics recovered there had characteristics similar to Fikirtepe artifacts and were mostly black, deep brown, or various shades of red; only rare pieces were lighter in color. Their surfaces were neat and well polished. The shapes of the pottery were flat or convex on the edges, while the crockery pieces and bowls had narrow mouths and were slightly curved in an S shape. Triangular, circular, and a few tubular handles were also found. Among the clay items, a female figurine stood out. Most of the ground stone tools, which constituted the largest category of small artifacts, were made of obsidian. The most remarkable of the bone tools found within the settlement were the spoons.

ISTANBUL EXCAVATIONS: THE MARMARAY AND METRO RAIL CONSTRUCTION PROJECTS AND THE CONTRIBUTIONS OF ARCHEOLOGICAL RECOVERY EXCAVATIONS TO THE URBAN HISTORY OF ISTANBUL