THE GREAT ISTANBUL FIRE OF 1660

The great fire of July 24, 1660, is the largest fire known to have occurred in Istanbul.1 Due to the carelessness of a smoker,2 the fire started in mid-afternoon in a chest shop near Ahi Çelebi Mosque, located between Odunkapısı and the Ayazmakapısı. From the lumberyards in Unkapanı, the fire spread rapidly in all directions, eventually reaching Ağakapısı, Süleymaniye, the Old Palace, Beyazıt, Fatih, the Janissary quarters, Molla Gürani, Davutpaşa, Tahtakale, the Jewish neighborhoods, the Grand Bazaar, Mahmutpaşa, Hocapaşa, Atmeydanı, Kadırga Port, Kumkapı, Nişancı, and Samatya.3 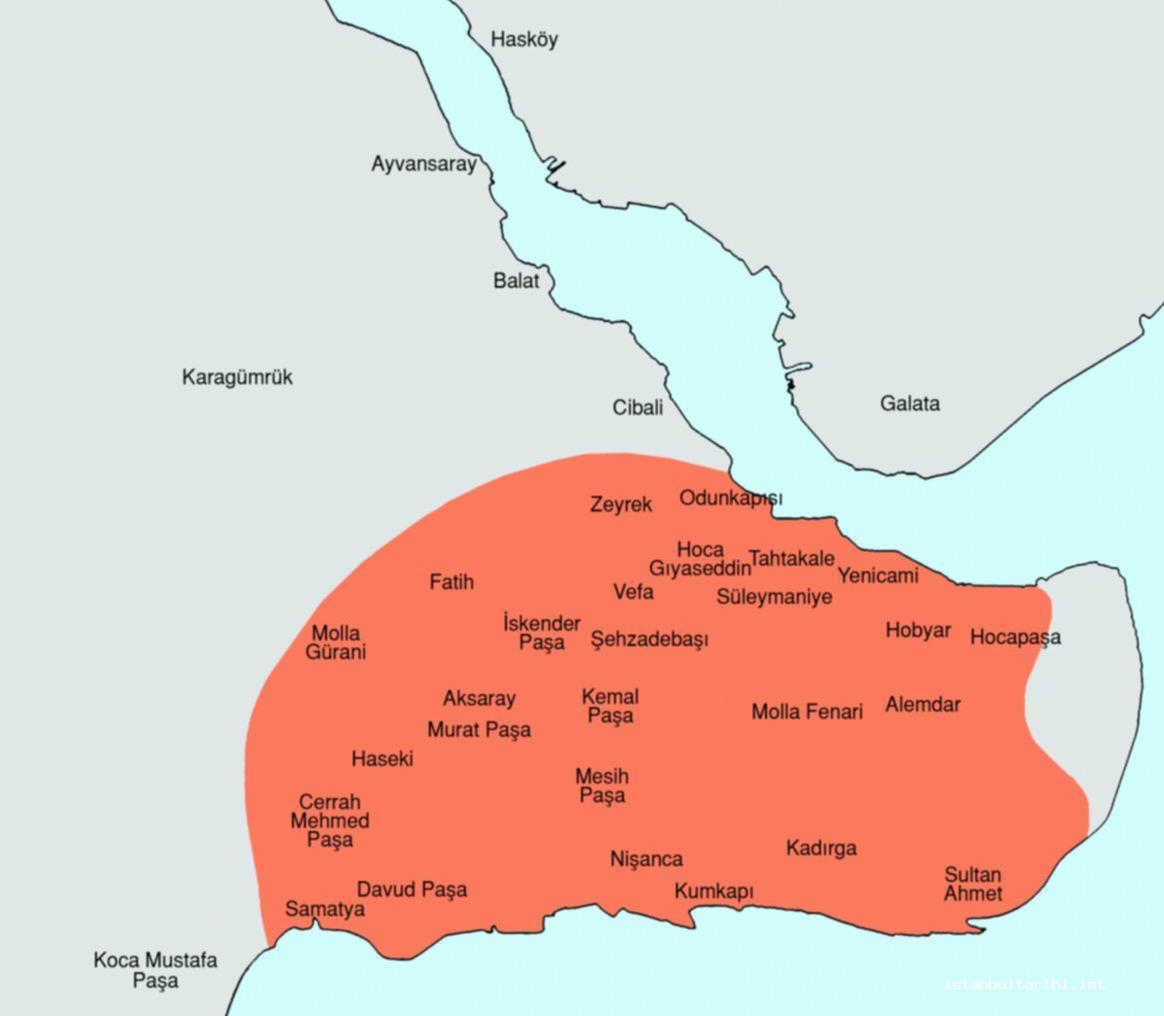 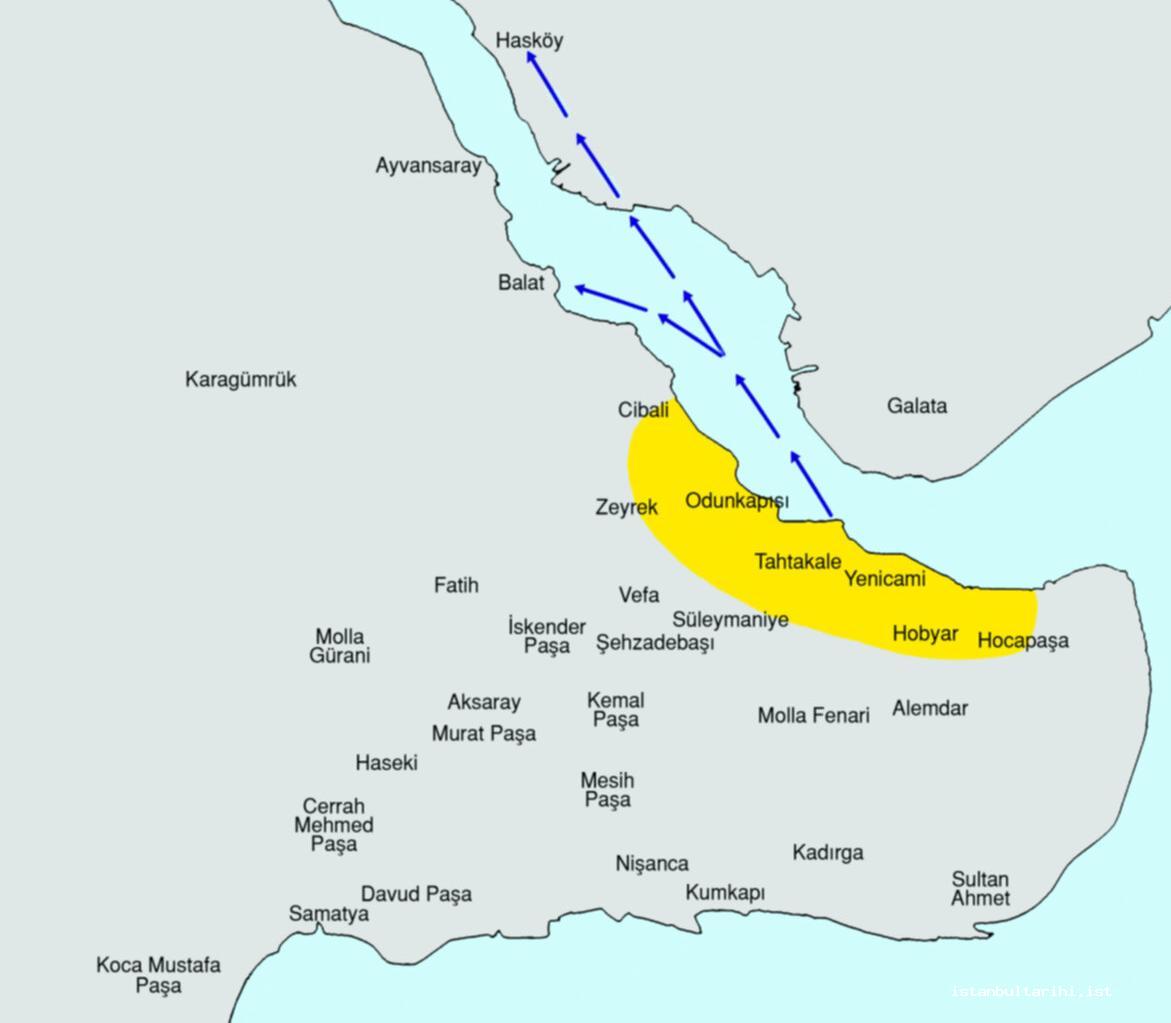 Despite efforts to prevent the fire from spreading, strong winds fanned the flames,4 and two-thirds of the city was reduced to ashes. Many houses burned down,5 and between 2,700 and 4,000 people lost their lives. Additionally, 120 palaces and mansions, 40 hamams, 360 mosques, and over 100 storehouses were burned down, as well as numerous madrassas, tekkes, and churches.6 Eremya Çelebi, a witness of the great fire, gave the following account of the devastation:

Not that many Armenian, Jewish and Greek people died in the fire. On the other hand, the number of Turks who lost their lives was in the three thousands. Out of the 18 markets in the city, 13 succumbed to the fire, leaving only five. 45 large bakeries, 200 horse mills, 90 hamams, many palaces, houses, mansions, schools and madrassas, 1,000 masjids and 70 mosques, several Mawlawi tekkes, a large number of mausoleums, fountains, 9 Armenian and Greek churches, the holy springs of Orthodox Greeks [hagia ma], and 36 synagogues were devastated.7

Mehmed Halife’s comments on the fire are remarkable: “There was an inn known as Kebecihan (Inn of the Felt Jacket Makers). Before this fire, it had not been damaged by any fire. This time, with Allah’s will, the fire destroyed all the cloth, goods, and people in it.”8 Katibzade’s verses about the burning of the Kebeci Inn are as follows:

Kebeciler Inn was supposedly a strong building
Ignited like a flint stone, entirely collapsing
Many merchants were roasted in it
All of them were shouting out, screaming9 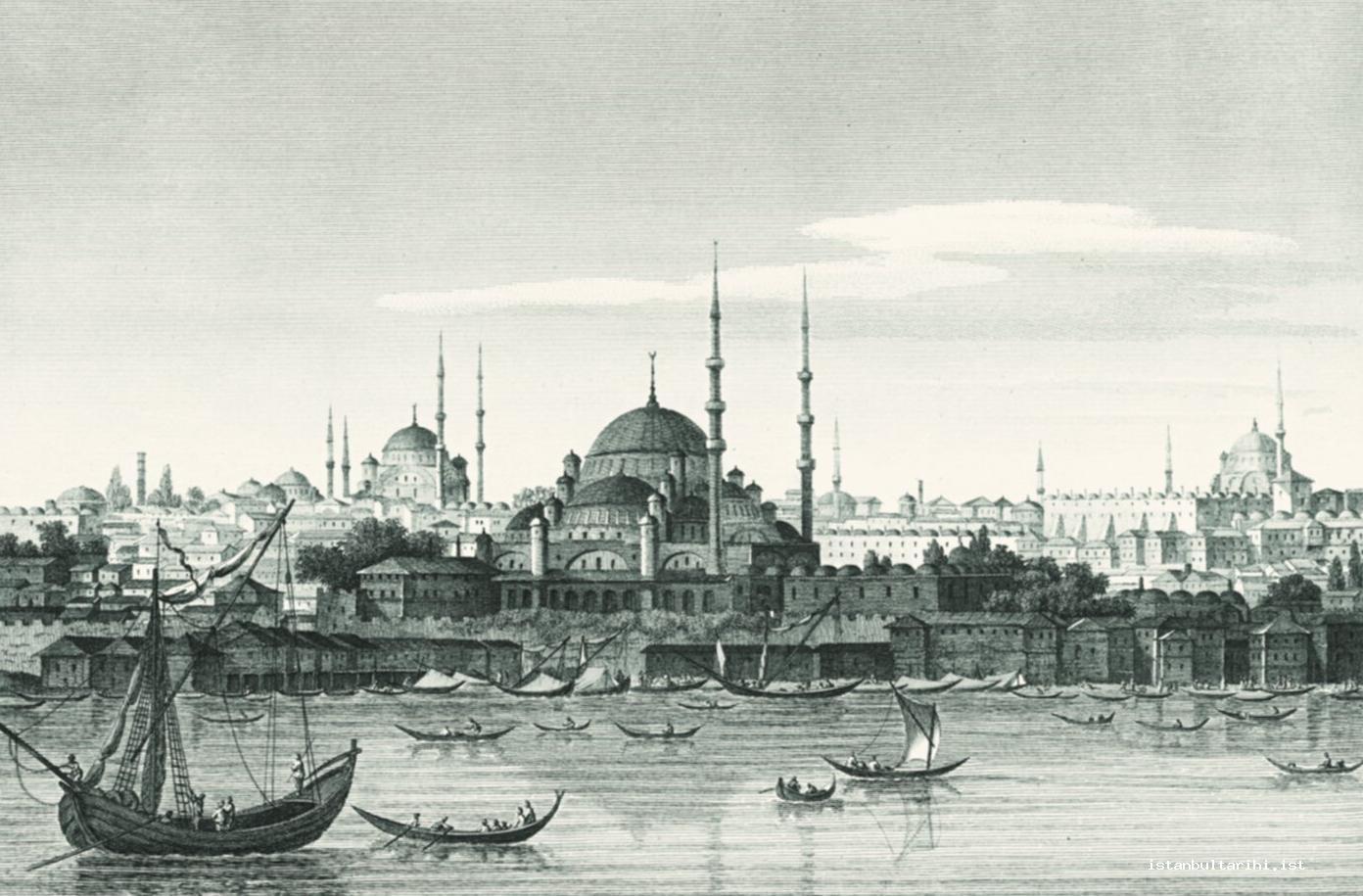 Several conditions caused this fire to be particularly devastating: it took place in the dry month of July, the northerly wind was very strong, and many lumberyards were situated in the immediate vicinity of the ignition point.10 Katipzade emphasized the wind’s strong effect when he said: “The fire began at the outside of the Ayazma Kapısı / The master made the wind accompany it.”11 He depicted the burning of the minarets of Süleymaniye Mosque as follows: “Sultan Süleyman’s four minarets burned down, as if it was the sultan’s burning torch leading his army.”12 The intense heat of the fire caused nails from the damaged houses to shoot out into nearby buildings; this contributed to the rapid spread of the fire.13 People stampeding through the streets, sweltering due to the intensity of the fire on an already hot summer day—all this looked like a depiction of the Day of Judgment.14

Mehmet Halife argued that the fire was divine retribution for manipulative marketing and other sins. He noted that there was an outbreak of a plague and a severe food shortage as well. After the fire, the people of Üsküdar, Eyüp, and Tophane could barely find enough bread to survive, and even that with great difficulty.15 Eremya Çelebi noted that some people sheltered under boats on the shore, but most of them gathered on the piers, where the sand from the beach, beaten by the waves, splashed onto them, and the sparks from the burning buildings fell on them.16 Some survivors of the fire emigrated to Bursa, İzmit, or another coastal town; some went as far as the Crimea and Egypt.17

The Langa Bostanı gardens and Vefa Square were used as storage sites for furniture and other goods rescued from the fire;18 the mosques and storerooms, which were safer than open spaces, were used for the same purpose. Some people attempted to take shelter in stone buildings such as the Beyazıt, Fatih, and Süleymaniye mosques and the Old Palace. However, since the fire was extremely devastating, some of these people lost their lives, burned together with their belongings.19

The bostancıbaşı (head gardener) İbrahim Agha was made a vizier because he gave the people who were fleeing the fire permission to enter the Hasbahçe (royal) Gardens without waiting to ask the sultan’s permission. On the other hand, Ruhullah Efendi was relieved of his duties as the qadi (Muslim judge) of Istanbul, and Dahkî Mustafa Efendi, the former qadi of Edirne, was assigned to replace him. These were some of the important political consequences of the great fire.20 Vizier Debbağ Mehmed Pasha was executed because he had reported the fire to the Sultan instead of the kaimakkam (deputy grand vizier) Süleyman Pasha in contravention of the law.21 The claim that Mehmet Pasha had been negligent in extinguishing the fire served as justification for his execution.22 Sultan Mehmed IV, who was in Edirne at that time, forbade his subjects to speak about the fire and executed anyone who did not comply with this order.23

Soon after the fire, the construction of the Eminönü Yeni Valide Mosque and its külliye, which had stood unfinished for years, was completed on the decision of Valide Hadice Turhan Sultan, after clearing legal issues such as land compensation with the nearby foundations. Since the mosque needed a Muslim community to serve it, the Jewish tenants of the mostly Muslim foundations in the area were expelled on the order that “After the fire, there should not be any Jewish residents in the area from Hocapaşa to Zeyrek.”24 With the construction of the külliye, the silhouette of Istanbul acquired a new aesthetic dimension, and the religious demographics of Eminönü changed due to the relationship between the mosque and its surrounding community.25

5 Although the number of houses burned down was given as 280,000 in some sources, this is undoubtedly an exaggeration. (Silâhdar, “Zeyl-i Fezleke”, p. 209).