Istanbul’s fires are an important part of its history. Fires are the most destructive of the natural disasters experienced by a city; in addition to the material damage they cause, they also destroy a significant part of the city’s cultural heritage. As a result of fires, a restructuring of Istanbul occurred from the second half of the 19th century onward. Immediately after the fires, zoning plans were made, and in addition to the restructuring of streets and roads, districts were re-established with the distribution of construction permits. Fire maps created for this purpose contribute significantly to our understanding of the arrangement of these new districts, and of the city’s fabric more generally and its changes over time.

This article discusses the characteristics of several such maps, selected to represent an analysis of nearly 850 maps identified in the libraries of Istanbul—primarily the IBB Library and the Museums Directorship of the Atatürk Library Archives.

The first of the maps discussed here, Map and Scale Organized Based on Fires in Various Parts of Istanbul after the Declaration of the Meşrutiyet (Map 1), shows the parts of Istanbul that burned down after the Meşrutiyet, and is a general map with a scale of 1:25,000.1 Detailed information about each fire is included in the map, including the date of the fire, names of the places that burned down, number of buildings destroyed and their total area, expropriation costs, estimated costs of the roads that had to be rebuilt after the fire, number of buildings constructed, and date when construction commenced. In addition to 55 fire locations shown on the original map, 13 more were added in pencil. It can be determined that 7,500 homes burned down during the Fatih–Cibali–Altımermer fire of 1918. Following the fire, advertisements in newspapers were taken out declaring that fire maps were to be created. 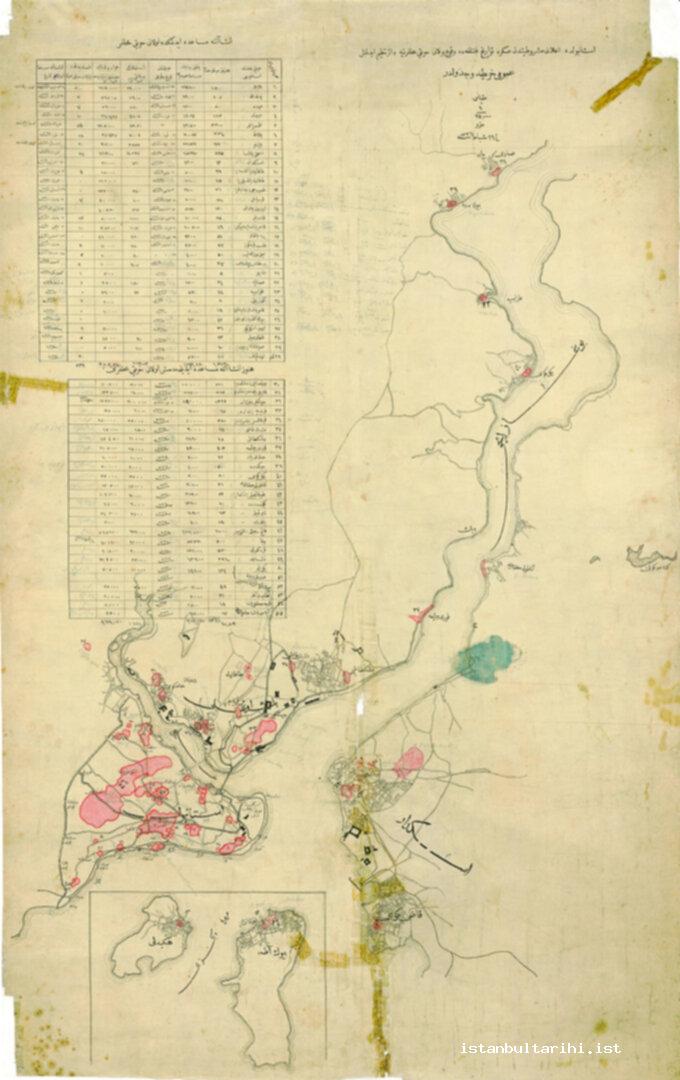 A number of maps exist that show sections, of varying sizes, of the area burned in the aforementioned fire.2 (Map 2). In these maps, the new zoning plan is shown in black and the old layout is shown in red. Fire boundaries are conveyed with thick red lines, and the parcel numbers are clearly marked.

Map No. 3055 (Map 3), which is not included in the Anahtar section, shows “the fire areas of the Kadi and Cevizci cul-de-sacs off Akseki Street.”3 The area of the fire is depicted with a red line on the map. The buildings that burned down are numbered and listed in the upper left corner of the map in a table. The graph offers information, based on the calculations of the new parceling study, on the number of buildings on the map and their size (in square meters) before the fire, length of the streets, owners’ names, former real estate numbers and streets, foundations to which the buildings belonged, and the size of the façades. The damage on the street is depicted and the cost is calculated one by one. Like other fire maps, it makes a significant contribution to the history of Istanbul, providing data on, for example, the history of the street and district, property ownership, the district’s residents, the assets that belonged to the foundations, and their condition. It documents the existence of various foundations, such as the Sadr-ı Esbak Mesih Paşa-yı Cedit Vakfı and the Mustafa Ağa Vakfı. A close study of the map reveals that Akseki Street and Kadi Cul-de-sac were essentially foundation streets. In addition to locations such as the Hırka-i Şerif Mosque, the cemetery, and the Gendarmerie Academy, it is possible to identify vegetable gardens on the map; these no longer exist.

The Eminönü-Beyazıt Kaşıkçılar Kapısı Street Fire Area map, registered as No. 3951 (Map 4),4 shows an area where a second-hand book market stands today. This map, unlike other fire maps, demonstrates the situation both before and after the fire (hey’et-i atiki and hey’et-i cedidi or kable’l-harik and ba‘de’l-harik). The map also has a table that functions as an index. It includes the map numbers of the stores, their status (whether or not they had been sold), total area in square meters, and the names of the owners (for example, Haşim Efendi’s store and Gedikli Mehmed Rahmi Efendi’s store). The stamp of the government office and engineer are included on the map, along with Beyazit Mosque and its imaret (soup kitchen). With maps like this, it is possible to identify changes in street and road structure for a predetermined area by juxtaposing them with maps from later periods. This makes it possible to obtain important data about the history of the district and its topography.

The Eminönü–Küçükpazar fire map and record, shown below, demonstrates the importance of fire maps; we hope that it will help us discover additional such fire records. 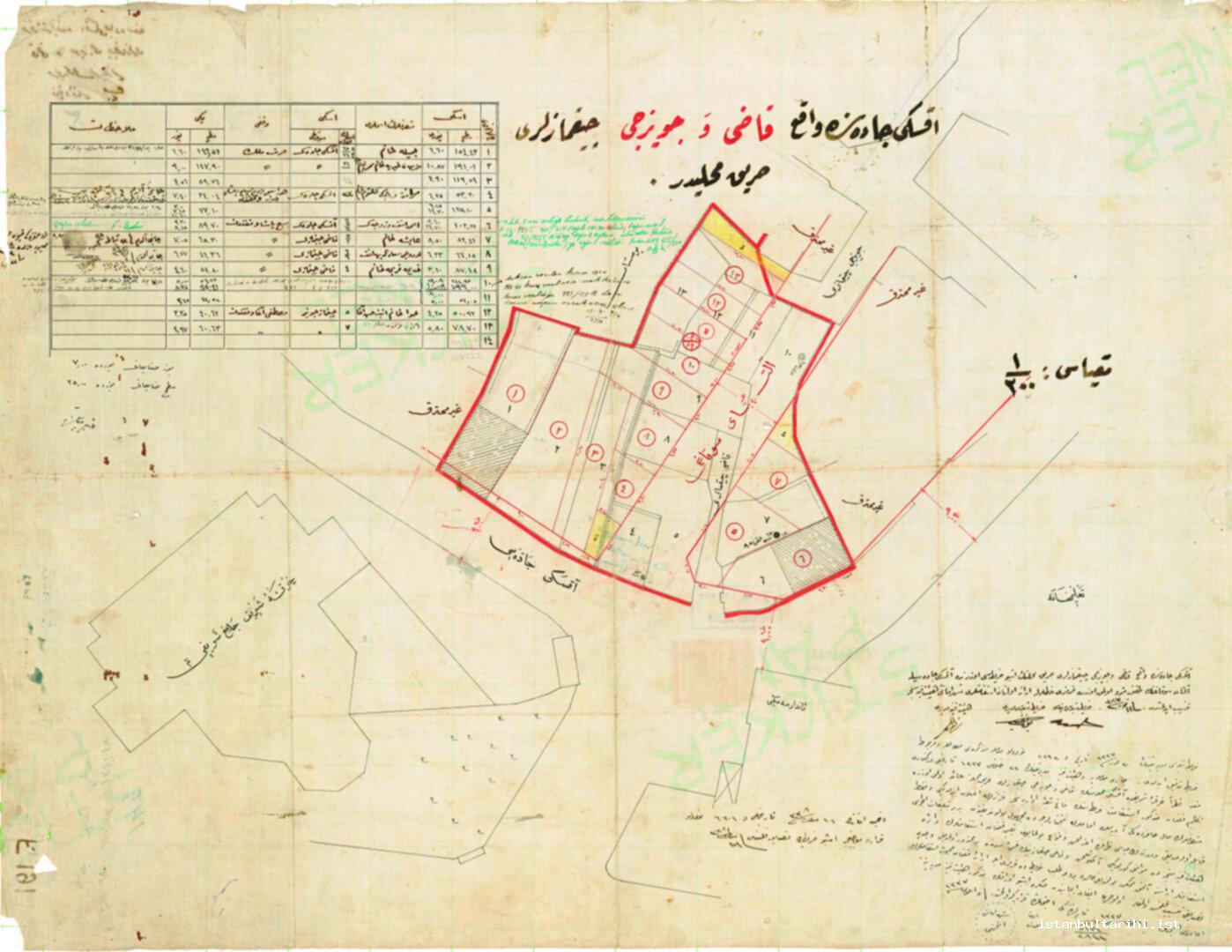 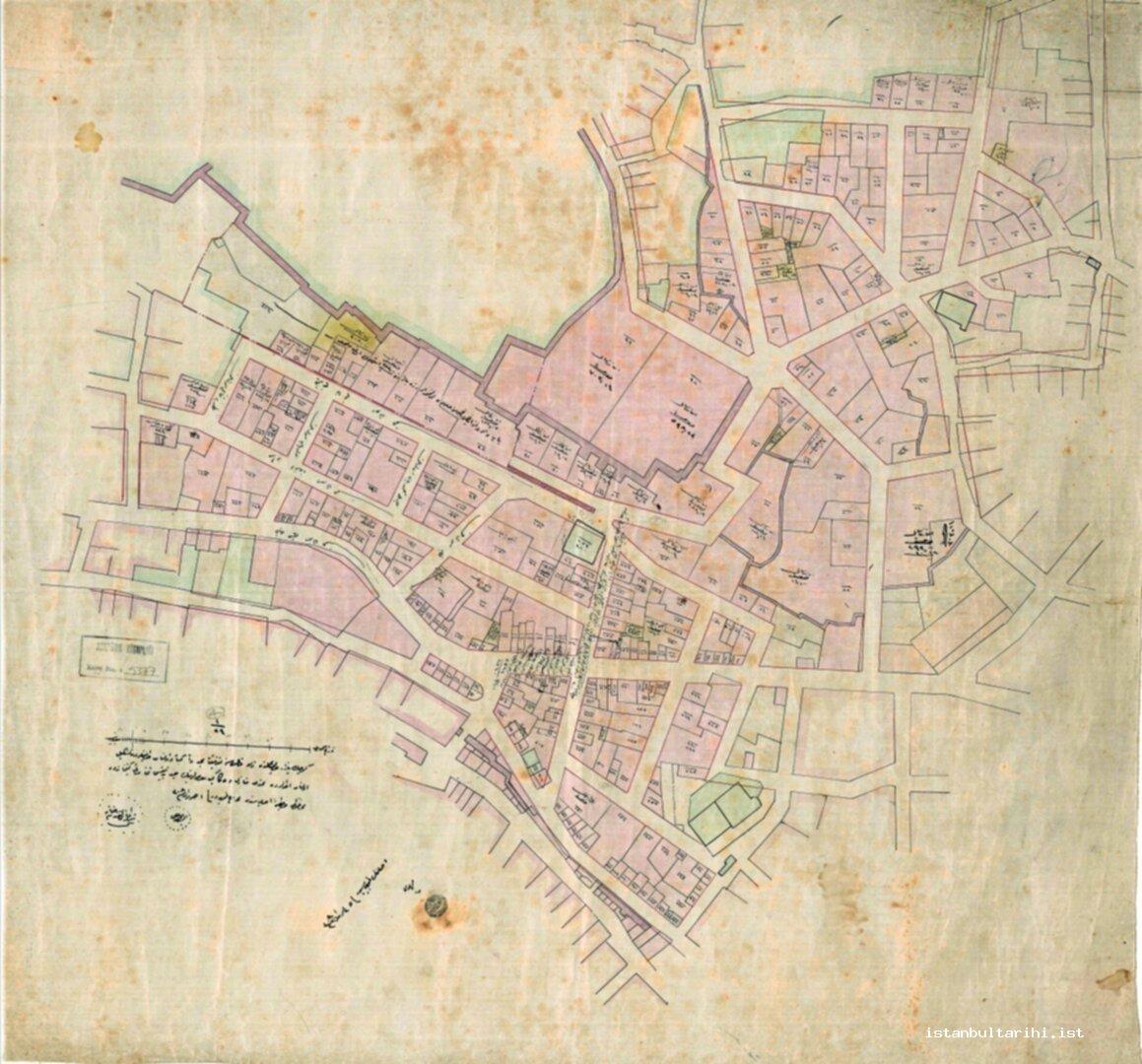 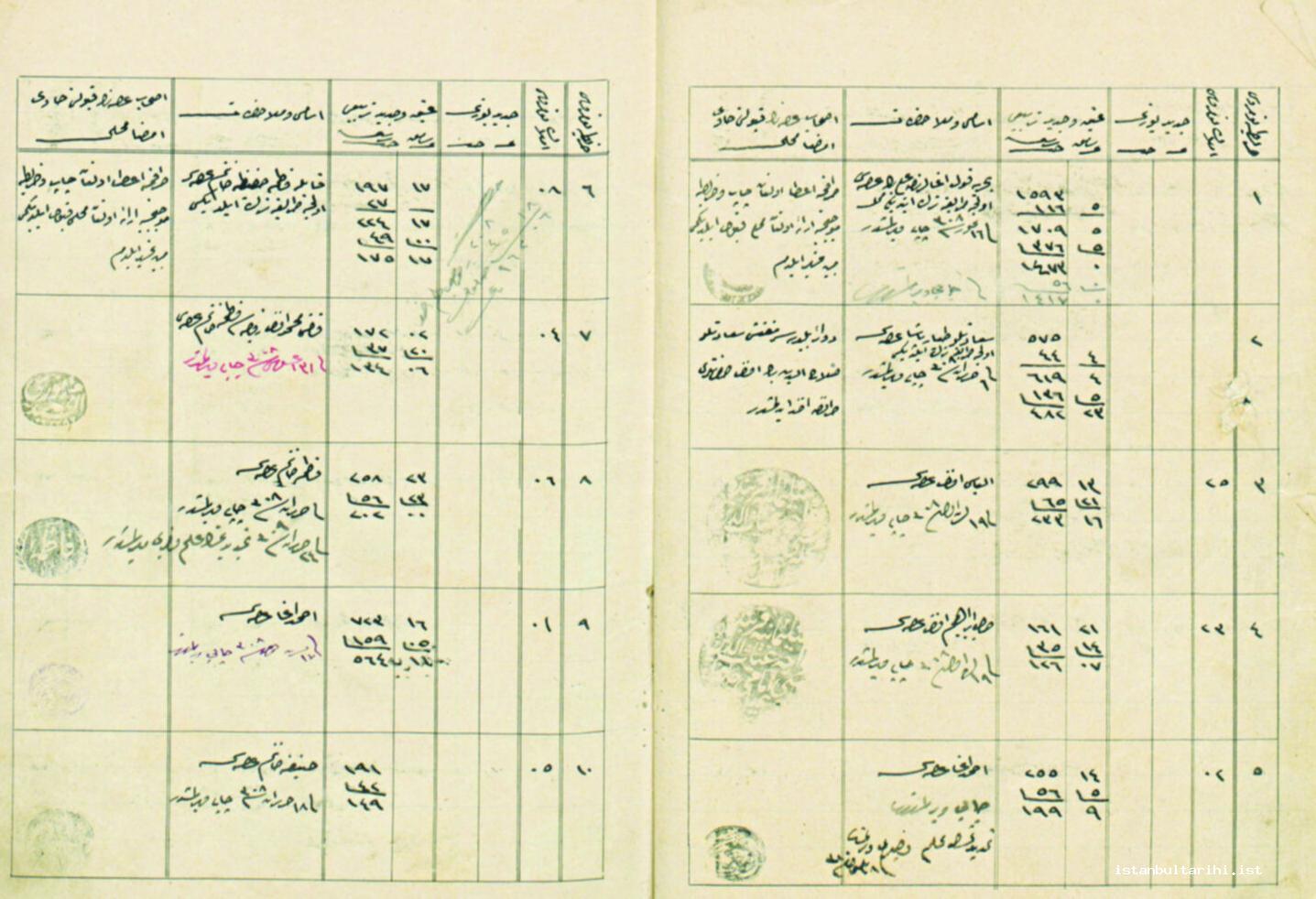 In addition to this record, there must be other notebooks with fire maps that have been classified; unfortunately, we have no information on their whereabouts. In conclusion, the fire maps that we have examined are archival materials that can serve as important source materials for the history of Istanbul’s districts and streets.

4 It is a map of the fire areas of the Eminönü - Beyazıt - Kaşıkçılar Gate Street, İstanbul: Şehremaneti (municipality), 1303, İstanbul municipality Atatürk Library Map Archive no: Hrt-3951.