The gravestones of the Ottoman period the best and many examples of which we can see in the cemeteries of Istanbul show us its belongingness through many features starting with the person’s identity, date, social life, city, faith, death, angels, titles, literature, dating by using the abjad method, writing, symbol, engraving, and stonemasonry. During the period of their foundation, Ottomans continued the gravestone traditions of the periods of Seljuks and principalities by improving them in form and text styles. This classical style which was developed in Bursa was transmitted to Edirne and to Istanbul, though not much, after the conquest. Those curved arched, with small columns on the sides, prismatic and horizontal stones with jali thuluth style calligraphic inscriptions continued to be used until the eighteenth century. However, the characteristic Ottoman gravestone types are those with headgear (başlık) which are peculiar only to Ottoman culture in the Muslim world. A systematic inventory of thousands of gravestones in Istanbul has not been done, yet. Most of the related publications deal with only one aspect of the subject such as inscriptions, decorations, or headgears. However, one can see an increase in recent years in the number of postgraduate theses and book publications on catalog studies. Moreover, some preliminary works on graves, gravestones, and headgear typologies have reached to a level which gives a general idea about the subject. The oldest stones in Istanbul cemeteries belong to the period after the conquest. Some of those stones were later renewed. Those first gravestones can be classified into two groups with and without headgears. Those without headgear are in the form of a tablet and their crown section is either in the shape of a pointed arch or a diamond. The inscriptions are in Arabic and written with thuluth style. In the hazires of Kumkapı Nişanca Mosque and Üsküdar Rum Mehmed Paşa Mosque there are nice samples from the period of Sultan Mehmed II. This group was improved by cylindrical and prismatic types which developed later. On top of some cylindrical ones, which is a common type, a hole was left to put water for the birds. Because this type has a wide surface, long poetical texts introducing and praising the deceased started to be written boxes. Under the influence of the art styles of the period, they are decorated with engraved acanthus leaves and the top sections were decorated with stylized motifs. The prismatic gravestones most of which are in hexagonal or octagonal shape are constituted from two types namely with and without sarcophagus. Because its surface is divided, the inscription is written on the front side of sarcophagus. And if the inscription does not fit into the front, it continued on the other sides of sarcophagus. Symmetrical motifs of sycamore trees, flowers in vases or pots, Solomon’s seal are placed on all sides of the sarcophagus. In prismatic tombstones without sarcophagus, the inscriptions are engraved on one of the widened sides of the prism. Prismatic shape stones are seen on the graves of various ranking state officials. 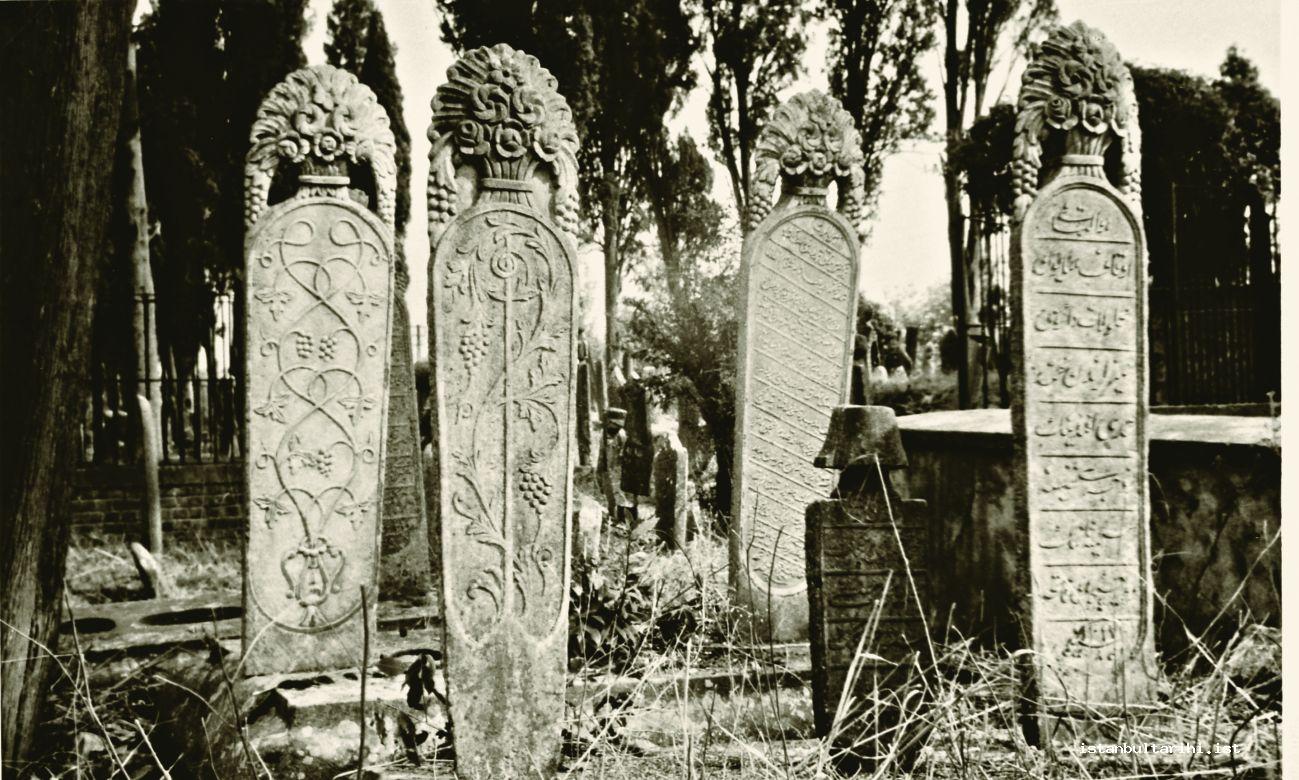 There are few samples of gravestones with headgears at the upper parts of gravestone in the shape of the turban worn by his lifetime. The gravestone of Mahmud Çelebi located in Rumelihisarı Martryrs Cemetery is one of the first samples of this group. Its body is prismatic and with small columns, the text of the inscription which consists of name, title, and prayer is written on four sides of the surface of the stone with big size letters. The gravestones of military and administrative officials and palace servants with headgears constitute a big group of gravestones. At least those who were at the same level of the society used by their graves same or similar ones of these headgears, which were used by all levels of society from the grand vizier to the lowest ranking state officials. The headgears of the high ranking officials at the top of the bureaucracy had their own characteristics. Before the announcement of fez in 1829 as the official headgear, high-ranking state officials wore several types of turbans called mücevveze, selimî, yusufî, kallavî and örfî. However, because a bureaucrat wore different turbans at different times, from time to time it is possible to see varying headgears at the gravestones. For example the grand vizier would wear kallavi type turban when he went for a military expedition or on the eve of a religious festival. He would wear mücevveze turban at the meetings of Imperial Council of State (Divan-ı Hümayun) and Friday Processions (Cuma Selamlığı). He would wear selimi turban in the presence of the Sultan or while visiting Eyüp Sultan Tomb. Kallavi was the ceremonial turban of the grand vizier, vizier, and paşas with three or more tuğs (horsetails attached to a helmet as a sign of rank). On his kallavi, vizier would have about four finger wide strip (istiva) which would wrap around the turban from right to left and in a crossed pattern. Mücevveze turban which was used from the period of Bayezid II to the period of Selim III was usually the ceremonial turban of some of the ranking officials in the palace such as mirahor (master of the stable), hazinedarbaşı (head treasurer), Darüssaâde ağası (chief black eunuch of the Sultan’s palace), and Dergâh-ı Âli kapıcıbaşısı (head gatekeeper of the Sultan’s court). This is why the exact rank of the deceased with a mücevveze turban on his headstone could be known only after reading the inscription of the gravestone. On the other hand it is clearly seen that örfi turban was worn by the members of intellectual class especially sheikh al-Islams and kazaskers. The inscription of the gravestones of the intellectual class was usually engraved by ta’liq style calligraphy. 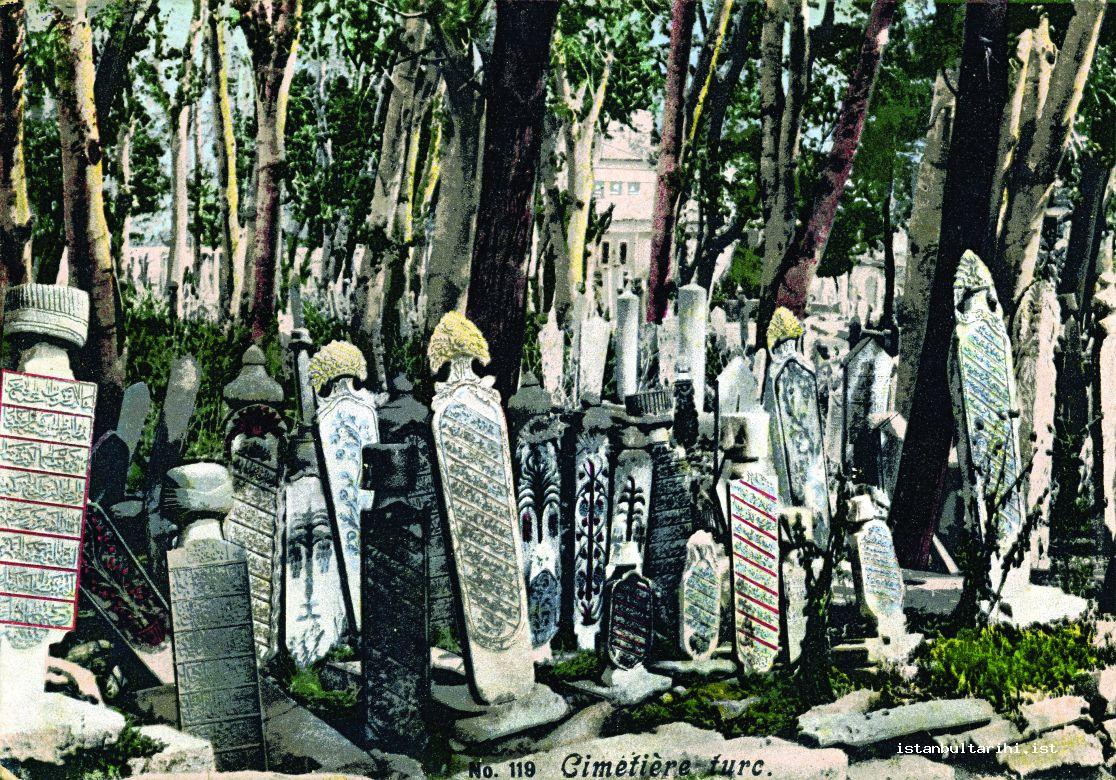 There are special type of finials called kafesî destarlı kubbeli kalafat on the gravestones of the high-ranking bureaucrats of Imperial Council of State and Sublime Porte, or Hacegan-ı Divan-ı Hümayun. However, it is necessary to read the inscription on the gravestone in order to understand whether it belongs to a reisülküttap (minister of foreign affairs), or a beylikçi (head of the government chancery office), or a defterdar (minister of finance), or a nişancı (the officer who is charge of inscribing Imperial monogram), or a tersane/darphane emini (superintendent of shipyard/mint). This type of headgear can be usually seen in the eighteenth century. After the middle of the century, this type of finial started to be seen on the gravestones of high ranking clerks such as Council clerks, and the clerks of janissary, cavalryman, and armorer corps. Katibî turban which was worn by middle and lower ranking bureaucrats was the most common type of headgear. According to the size of the turban, the pattern of its seaming whether it is vertical, diamond or star shape, and the way of wrapping of its muslin band, there are various sub-types. In some of them, there is common to see a rosebud or a small flower bouquet attached to its muslin band. On the gravestones of officers working at Palace school such as hasodabaşı (the officer responsible for the Sultan’s clothes), hazinedar, çukadar (the officer in charge of the sultan’s robes and boots), it is seen an elaborate, decorated, and cylindrical golden hat shape headgear. After Sultan Mahmud II’s clothing reform, military and administrative officials started to wear fez and this change also mirrored in the gravestones. They were named after the Sultan of the period such as Mahmudiye, Mecidiye, Aziziye and Hamidiye. There are minor differences in sizes and forms among them. 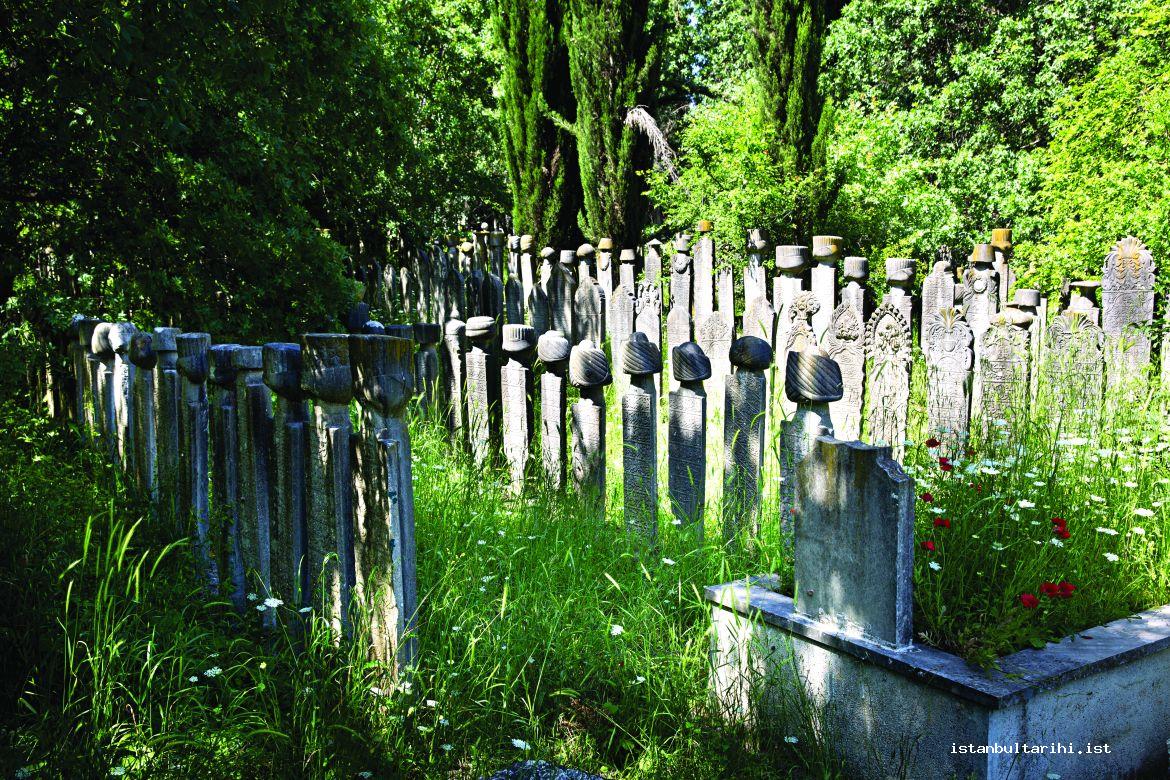 Rich samples of the symbolism developed by Sufi orders that had an important place in religious and social life of the Ottomans reflected in the gravestones. There were various types of Mawlawis’ long headgears made from felt in accordance with the hierarchy of their order such as örfî, cüneydî, şekerâviz and şekerâviz kafesî. The headgear on dervishes’ gravestones are branch headgear without muslin band. For those at the station of muhib, the headgear is not placed on the gravestone but engraved on the inscription. Bektaşi Sufi masters had 12 partitioned hüseyini type, 4 sectional edhemi type and elifi type headgears. There can also be 12 angle submission stone, boat-shaped cup (keşkül), and halberd (teber) figures on Bektaşi gravestones. The crowns of the followers of Qadiri and Naqshi orders are with eyelashes (müjgan). On Qadiri crowns, there are 18-cornered stars and 8-leaf roses. Rose motif is also seen on top of some female Qadiri disciples’ gravestones. The crown of Bayramis are 6 sectional, while Celvetis’ are 13 sectional. Because Melamî-Hamzavîs on the other hand do not pay attention to appearance and form, but hide themselves, one cannot see any headgear, symbol, or information on their gravestones. However, one may know that they are Melamî-Hamzavîs from their special gravestone called “bî ser ü pâ (headless and feetless).” 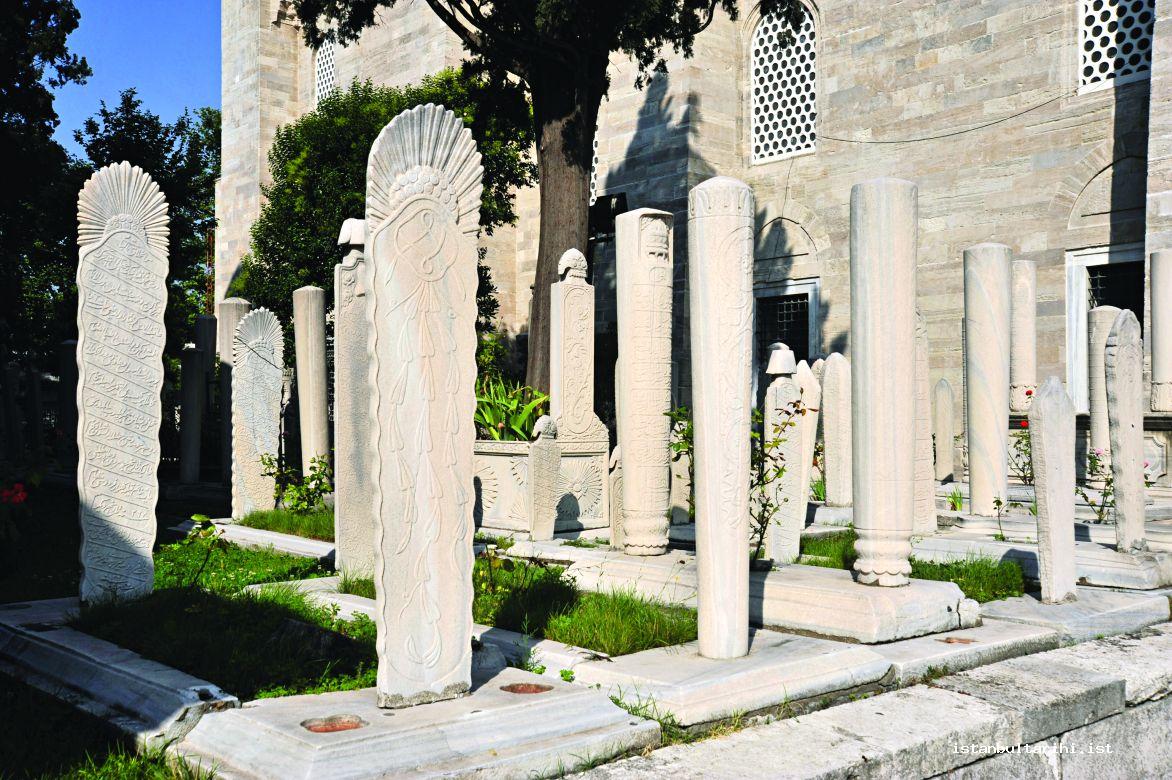 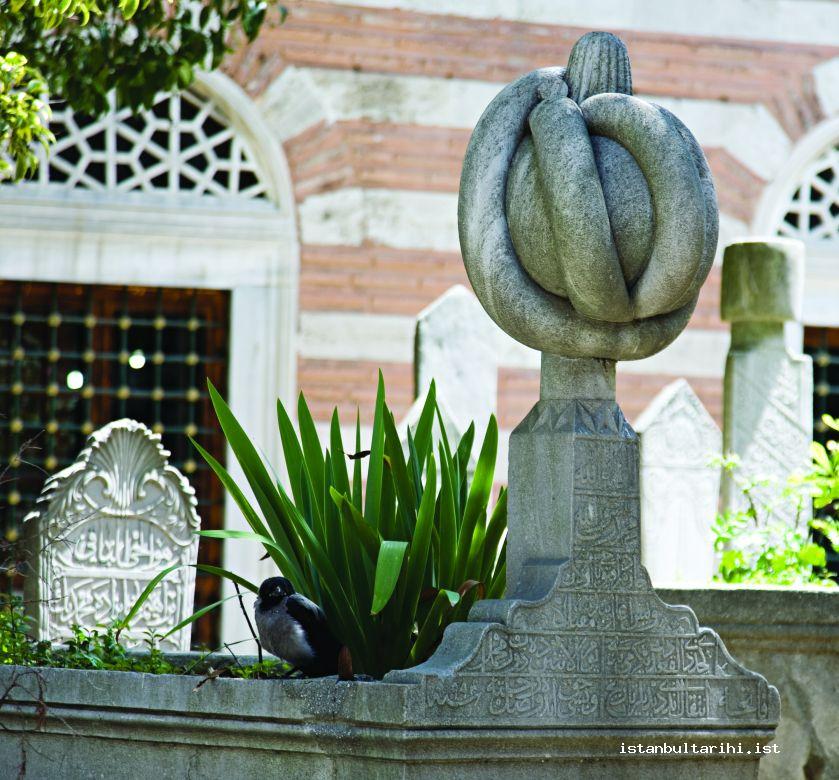 On female gravestones, there was not any headgears except the ones with the shape of crest. However, decorations became prominent on them. On the top section of the inscription, there were decorations in the form of a flower basket or something similar. On some of the gravestones with crest shape finials, one may see neckbands. Ottoman female gravestones were more intense in respect to decorations. Motifs of flowers like tulip, rose, dianthus, and hyacinth and flower baskets as well as fruit plates were used. The motifs like sycamore trees, sycamore trees twined with vine branches, rose bush, and date palm were preferred especially on the footstones. However, it is started to be seen the influences of still life decorations with the emergence of modernism.

The inscriptions of gravestones were initially written in Arabic, and then in Persian and eventually in Turkish. On the gravestones of sixteenth and seventeenth century scholars, one may see, though not many, Arabic inscriptions. Turkish inscriptions which were initially constituted only from a few prayers and short identification were like the translation of Arabic inscriptions, but in time the size of the text grew and even because of this, the size of the gravestones began to get bigger. The contents of the text started to change. At first religious elements were dominant. Worldly and humanly reproaches regarding the perception of the themes of death started to be mentioned and more information was presented about the deceased. Likewise the text started to change from prose to poetry. Famous poets’ poems praising the deceased and expressions about the date began to take place. Taliq and jali taliq style calligraphy began to be used instead of thuluth, jali thuluth. Artistic concerns became prominent on the gravestones of high-class people, the text, inscription, decoration, and stonemasonry. Thus, the types of Ottoman gravestones emerged in the sixteenth century matured in the nineteenthcentury and lived through its richest form in the twentieth century.