The first national chamber of commerce in the Ottoman State was the Dersaadet (Istanbul) Ticaret Odası, which was established on January 14, 1880. Shortly afterwards, on July 7, 1880, the Dersaadet Sanayi Odası (Istanbul Chamber of Industry) was established. However, these two chambers only began to operate two years later. The chambers of commerce, industry and agriculture were gathered under one roof in 1889. Although the number of chambers in 1908 was more than 160 throughout the country, the existence of those that were established outside of Istanbul and some other important cities only existed on paper. In accordance with a new regulation, the Chamber of Agriculture was separated from the Chamber of Commerce and Industry in 1910.

According to 655 sayılı Ticaret ve Sanayi Odaları Kanunu (Law of the Chambers of Commerce and Industry No. 655), which was enacted in the second year of the Republic, the chambers acquired legal entity status and subscription to the chambers was imposed. While the chambers were keeping finger on the pulse of the country’s economy during the time of liberal expansion of the 1920s, when Ankara did not yet have the dominance over economics, they started to lose their efficiency with the preference for economic etatism in the 1930s. The government’s authority over the chambers increased with the Law No. 4355, enacted in 1943. 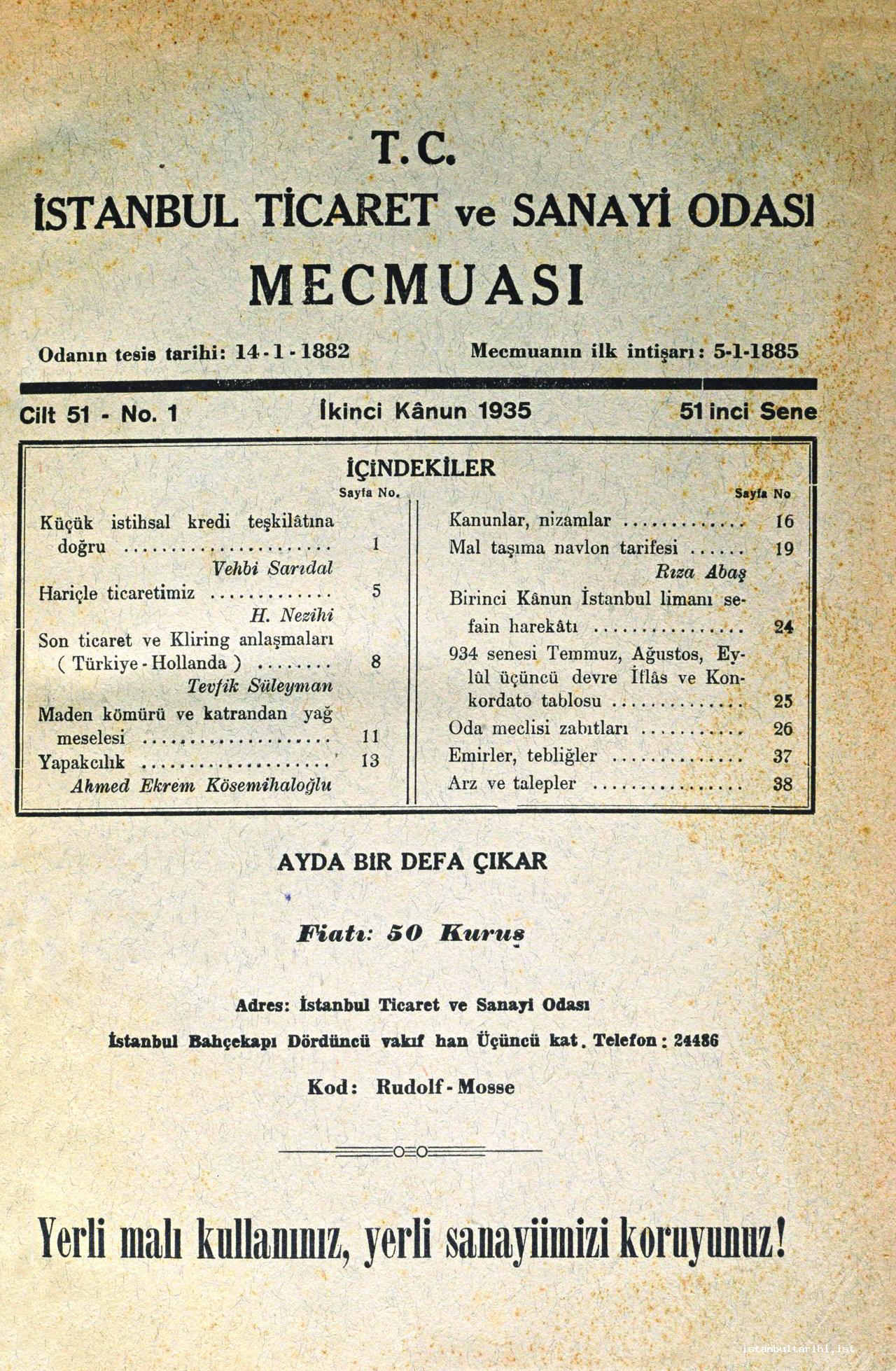 Law No. 5583, passed in 1950, provided an opportunity for foreign investment for the first time during the Republican period. With Law No. 5590, passed in the same year, chambers once again became the mouthpieces of private enterprises. The possibility of establishing chambers of industry, independent from chambers of commerce, also emerged with this same law. As a result of policies, which changed with the political power, the activities of the private sector became more intense and the activities of the Istanbul Chamber of Commerce and Industry (İTSO) expanded. With its wide representative power, the reports and proposals of İTSO helped to determine the government’s economic, financial and commercial policies.

The abandonment of liberal policies shortly after the foundation of İSO meant that the organization took on some important tasks. Operating as a public institution, İSO was primarily responsible for distributing the allocations of ministries in accordance with the needs of raw material and utility service goods of the industries. Furthermore, İSO ensured that the criteria set out by the Union of Chambers were implemented.

The 1960 Turkish coup d’état naturally strengthened the statist system. Holding executive power, the Millî Birlik Komitesi (National Unity Committee) closed down the Chambers of Commerce and Industry and dismissed staff, worried that they could form a pressure group. When wrongness of this policy was reported to the government by important industrialists of the time, it was decided that the chambers would be opened again on the condition that a new executive board be elected. The Millî Birlik government demanded that the administration of some private companies be changed as well.

After an agreement was reached on the administration, the Council of the Istanbul Chamber of Commerce, which was reestablished as a result of the efforts of some businessmen, was given the duty to select the minister of industry. Among the most popular candidates was Vehbi Koç. However, Vehbi Koç rejected this offer and Şahap Kocatopçu was presented to the Millî Birlik government as the minister of industry by the İSO Council; this proposal was accepted in Ankara. Thus, the candidate proposed by İSO, which had only a few months before been unconditionally abolished, became the minister of industry.

In accordance with the duties set out in 5174 sayılı kanun (Law number 5174), İSO provides basic information and documentation, as well as reports that are needed by industrialists during all stages of production and commercial activities, starting from the establishment of an institution to the manufacturing process. In this scope, İSO not only is concerned with enrolling and removing members, from the establishment of a business to its closing down, but also provides services as required, helping in procuring any required documents such as expert reports, documents of investment incentives and free circulation, and provision of other information and documentation studies necessary for industrial activities. The best-known service provided by İSO is the list Türkiye’nin 500 Büyük Sanayi Kuruluşu (The 500 Big Industrial Organizations in Turkey); this report is prepared annually.

Facing İstiklal Caddesi on one side and Meşrutiyet Caddesi on the other, and connected by a passageway, the building of Odakule in Tepebaşı is affiliated with İSO. İSO purchased Karlman Pasajı, one of the buildings damaged during the September Events, from Ziraat Bank. The intention was to establish an exhibition space, thus bringing the power of industrial production to the attention of the public. Considering the history, the choice of this space is meaningful. Between 1870 and 1926, Bonmarşe (Bon Marche), the first multi-story department store in Istanbul, was located in the area that Odakule -a 23-story office building- now occupies; between 1926 and the 1960s, Karlman Pasajı stood here too. Both of these establishments were among the first large shopping centers in Istanbul. Bonmarşe, owned by the Bertoli Brothers, was the first example of mass-merchandising in Istanbul. This store, in which all kinds of goods were sold, was constructed in the area that had housed the residence of the Alleon family, one of the important families in Pera in the 1850’s. In 1896, the Karlman family, owners of the famous garment store in Pera, purchased Bonmarşe. The building, which was taken from the Karlman family in 1942 in lieu of taxes, was used as the warehouse by the Osmanlı Bank for several years. The building, which afterwards passed into the ownership of Ziraat Bank, was purchased by İSO. At the beginning of the 1970s the building was torn down, and the building that stands there today was constructed. The architects of the building were Kaya Tecimen and Ali Taner. Like Karlman Pasajı, the ground floor of the building was designed as a passageway connecting Istiklal Caddesi and Meşrutiyet Caddesi. Intercontinental Hotel, constructed on the location of Istanbul Kulübü in the 1970s (later to become Etap Marmara, and today The Marmara), Sheraton Hotel, which was constructed on the location of Taksim Belediye Gazinosu (later to become Ceylan and then Intercontinental Istanbul), and the tower, the fourth tallest building in the city after Harbiye Orduevi (officers’ club), became the symbols of the İSO. The building, considered to be a skyscraper during the years it was built, is nowadays described as a skyscraper parody, due to the lack of harmony with the historic fabric of Beyoğlu. Today, İSO uses only a single story of Odakule. The İSO center, located on Meşrutiyet Caddesi, near Beyoğlu Öğretmenevi (teachers’ club), is a historical building, constructed by the architect Kambanakis in the 1880s; this structure was formerly used as a hotel and workshop by the Istanbul Şehir Konservatuvarı (city conservatory).