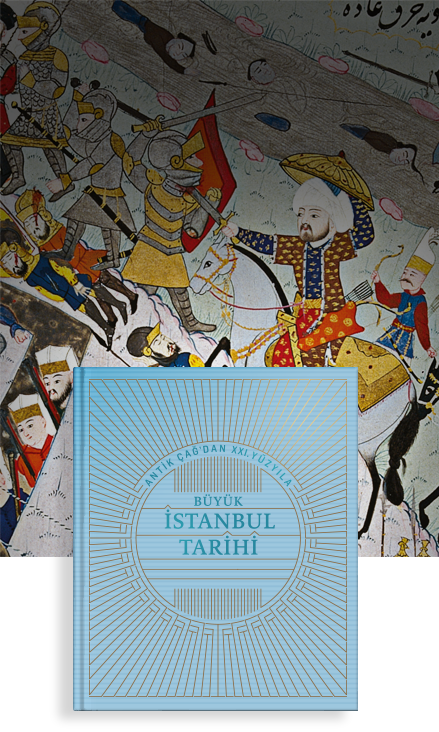 City of Istanbul, priceless and peerless!
I would sacrifice all Persia for one of your stones!

There are very few cities in the world like Istanbul that has left such a deep impression on history in political, economic, cultural, strategic and even religious terms. Istanbul is a city which had served as a capital for Roman/Byzantine and Ottoman empires and joins two continents, thus two separate worlds and two major seas. This city or the position of this city has determined and led the world politics. Istanbul has maintained its quality of being a popular city in terms of global trade in every period of history. This explains the fact that Istanbul has attracted a very crowded population and richness throughout the history.

Importance and size of Istanbul are not limited to these. Hagia Triada Greek Orthodox Church, which is the largest church among eastern Orthodox churches, has been standing as a religion center whose teachings and directions have been much valued in this city since official acceptance of Christianity in Byzantine. This city had also been the epicenter of Islamic Caliphate from Selim I until its abolition for four centuries and all Muslims around the world have watched and admired this city.

This also explains why the most distinguished works of civil and religious architecture have gathered in this city. Architects and artists had the opportunity to and endeavored to create their most glorious works in this city. Hagia Sophia, which is one of the oldest eastern sanctuaries, still stands with all its glamour here. Maiden’s Tower and Galata Tower are still among the most iconic historical works in Istanbul. The most stunning works of Islamic architecture, particularly Fatih Mosque, Bayezid II Mosque, Süleymaniye Mosque, Şehzadebaşı Mosque and Sultanahmet (Blue) Mosque and the most distinguished examples of Ottoman mosque architecture still serve to the believers of the city. Bridges, aqueducts, cisterns and dams are the civilization works which have been landmarks in various parts and surroundings of the city in order to facilitate the lives of the residents. Remains of the Great Palace and the Palace of the Porphyrogenitus in Ayvansaray, carry the traces of Eastern Roman/Byzantine administration/civilization, while Topkapı Palace carries the traces of Ottoman administration/civilization to present day. With its humility and magnificence, Topkapı Palace in particular seems to tell the dynamics on which the Ottoman Empire based. Bosphorus and the Prince Islands harbor the most beautiful works of Ottoman palace architecture and civil architecture.

This city was blessed not only with architectural and natural beauties, but also cultural richness. Two major judicial systems, two of the most important collections of Roman and Islamic laws named Corpus Iuris Civilis and Majalla-i Ahkam-ı Adliya (Mecelle) were prepared in this city. The most beautiful works of Byzantine and Ottoman cultures and arts were created in this city. Istanbul attracted the most respected men of culture and art and raised them within itself. Bâkî, Nedim, Nef’î, Şeyh Galip, Yahya Kemal and Necip Fazıl wrote their poems in this city. Şeyh Hamdullah, Karahisarî, Kazasker Mustafa İzzet, Hasan Rıza and Sami Efendi produced their best calligraphy works here. The most beautiful hymns of the Orthodox Church were composed here. Hafız Post, Buhurîzade Mustafa Itrî, Hammamîzade İsmail Dede Efendi, Zekâî Dede, Sultan Selim III, Nâyî Osman Dede, Hacı Arif Bey and Tanburî Cemil composed their best religious and non-religious music in this city. This cultural richness must be the reason why Nedim said he would sacrifice all Persia for one of its stones.

Is it necessary to mention the strategic importance of Istanbul? Western rulers who wanted to have influence over the East and Eastern rulers who wanted to dominate the West have always desired to own Istanbul. Dreaming of going down to the warm seas, the North also aimed to have Istanbul, which is the key to transiting Mediterranean Sea. It is no wonder that our Prophet pointed Istanbul to Muslims as a common target and that many Islamic armies headed towards this city to conquer it afterwards. Due to these aspects, having Istanbul is both a blessing and a responsibility.

It should be admitted that Republican administration tried to put Istanbul into the background and ignored its glamour and the possibilities it may offer for the country in order to bring the capital city, Ankara, to the forefront and because of its unfavorable view of the Ottoman history. It can be deemed as an inevitable result of this view and downsizing of the state that the city’s population of one million and two hundred thousand in the last years of the empire decreased to five hundred thousand in the first years of the Republic. No serious investments were made in the city for at least a quarter of a century.

However, Istanbul was not a city to be easily put into the background, to be forgotten or ignored for its glamour. Istanbul started to earn back its rightful place among the world cities gradually from 1950’s and rapidly from 1980’s. Today, this city is the heart of industrial, economic and commercial life of Turkey and leads the areas of education, culture and art in our country with the universities, media corporations and all kinds of art activities it contains within. With the most distinguished works of Christian-Byzantine and Ottoman-Islam civilizations and its natural beauties such as the Golden Horn, the Bosphorus and the Prince Islands, Istanbul is still getting more beautiful every day, as always.

Embracing this responsibility, we set out to write a history of this city that is worthy of its historical and actual identity with the help of 300 scientists. Management and science team that came up with this study have worked day and night to create a book at this scale in a short period of time. They did not want to put out a mundane political or social history. The aim was to determine thirteen main subjects and inform our people of all aspects of Istanbul from pre-historical ages to present day.

History of Istanbul from Antiquity to the 21st Century was planned and prepared thematically in three main chapters. In the first part, “Imperial Transformations of Istanbul” and its place in the world history was set forth. It is followed by “Topography and Settlement”, “Politics and Administration”, “Demography”, “Society”, “Religion”, “Economy, Transportation and Communication”, “Literature, Arts and Education”, “Architecture” chapters. The final part consists of a section called “Istanbul in Memories” that includes interviews with men of culture, artists and scientists who spent their whole life or part of their lives in Istanbul.

It is important to emphasize that this book has properties far beyond just being a history of a city. Since this city was the administration center of Eastern Rome during Byzantine Empire and wide Ottoman lands during Ottoman Empire, the history of Istanbul also mostly consists of histories of Byzantine and Ottoman. Because the developments in this city had deeply affected both empires.

This should also be emphasized: This is the first time that the history of Istanbul diverged this much from political history with these three main subjects and became a subject of researches on religion, education, science, technology, art, culture, economics, law history, other subjects and particularly social history.

We are grateful to our editor Coşkun Yılmaz for his extraordinary efforts and hard work for days and nights in order to create this book. I also should thank the chapter editors and publication board for their efforts and redaction, science and consulting board for their contributions.

I should emphasize that the persistent requests of Istanbul Metropolitan Municipality Kültür A.Ş. was decisive in the constitution of this project. Dr. Architect Kadir Topbaş, who is the Mayor of Istanbul Metropolitan Municipality, has taken a close interest in and given support to this project from day one. To be honest, we always knew that we could rely on his support when we were undertaking such a heavy work. We undertook this heavy work in order to make a cultural contribution to developing and increasing the life quality of Istanbul to the best of our ability. Aside from the content, Kadir Topbaş’s close attention and contribution had a great role in presenting the book in this aesthetic and excellent way. I express my sincerest gratitude to him on behalf of myself and Istanbul History team.

Without supports of Kültür A.Ş.’s then-general manager Sabri Dereli and his successor Nevzat Kütük in overcoming every obstacle, it might not be possible to realize such a project.

We will be very glad if we succeeded in creating a work that is worthy of the magnitude of this city and expressing its richness and position within the world’s political, social, commercial and cultural history in a proper way via this 10-volume of History of Istanbul from Antiquity to the 21st Century.