In the nineteenth century, the different decorated pages that were presented to clients as samples for order by illuminators in the Vezneciler district of Istanbul were called muhrec pages.1

According to what the master artist Necmeddin Okyay said, a person who went to a tezhip (illumination) artist for decoration of Qur’anic pages would be shown these pages by the müzehhip (illuminator). In this way, the kind of decoration and the price to be charged for the work would be determined. This also ensured that no misunderstandings would emerge after the work had been completed. On some of these pages, we can see that the price for the tezhip has also been determined.

These pages, if they included calligraphy, were the basic wares of the shops, and were kept as samples in the chest of the müzehhip. They came into the müzehhip’s possession in the following way: when a calligrapher made an error while copying the Qur’an or felt there was a flaw in the appearance of the calligraphy he would not use this work. Such pages, referred to as muhrec (extraction), were not thrown away, but rather given to the müzehhip. The illuminator would decorate these pages as “samples” of their skills. On some of these pages Necmeddin Okyay recorded the names of the calligrapher and müzehhip himself, thus giving these pages documental value. Our teacher collected these pages in his youth from müzehhip who were living in Istanbul or from their heirs. 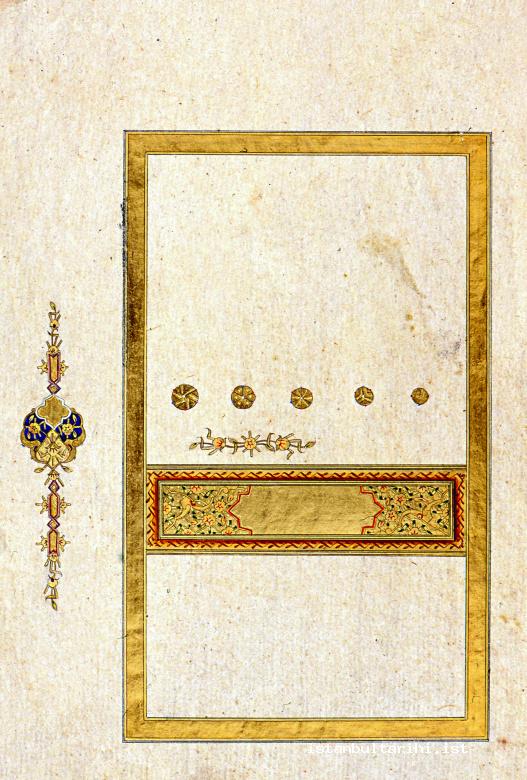 Some of these pages could be empty pages, prepared as examples of the illuminator’s work; these would have wide and rich margins, with the bismillah at the top of the page, and examples of roses and pauses; in particular, the start of the Sura would be included (Figure 1). In addition, the akkâse method could be used, giving the background an attractive quality by painting with two separate colors (Figure 2). There are a great many muhrec pages from a variety of collections to be found in Topkapı Palace Museum Library and in the Turk Islamic Works Museum. 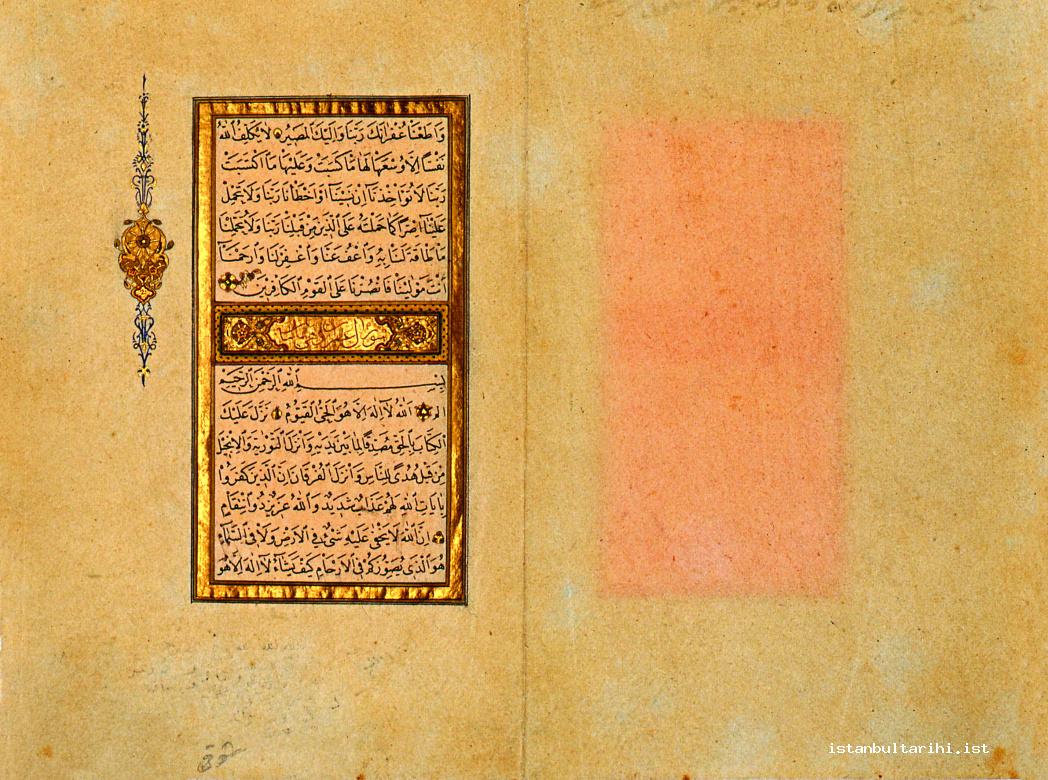 This method, used by illuminators in Istanbul during the nineteenth century, was also used in the last period by the müzehhip Mrs. Rikkat Kunt from Beylerbeyi. Madam Kunt used the album that was made up of her own designs; she did this in particular when new clients were making an order.

As we have confirmed from the master artist Okyay, Bahaddin (Tokatlıoğlu) Efendi used this method. Necmeddin Okyay stopped by Bahaddin Efendi’s workshop and after a friendly chat, Baha Efendi showed him a partially completed decorative work saying: “Master, do you think this worth a mecidiye (twenty kuruş)?” Necmeddin Efendi inspected the work with interest and then said: “Yes”. Thereupon, Bahaddin Efendi said “Then it goes to the chest!” When Necmeddin Efendi enquired what this phrase meant Bahaddin Efendi responded:

I reach an agreement with some clients, but they don’t pay in advance; they only leave a deposit. Then they don’t come back or call either. When I exert so much effort and don’t get paid, what can I do? I work to the extent that has been paid. Then I present the work to other people to get their opinion about whether it’s worth the money I was paid. If they agree, I keep it in the “illuminator’s chest” until the rest of the price has been paid. I’ve lost so much money that I don’t have any other choice. This is “it goes into the chest”.

As he concluded what he was saying he placed the piece he had shown me in the illuminator’s chest.”

This conversation between two craftsmen in Istanbul shows how much importance is attached to morality in art and respecting the rights of others.